After the races at Ultra Tour Monte Rosa were affected by snow, Sergio Mayayo gives us his first-hand account of the valiant efforts of the organisers.
By Sergio Mayayo
Share

This is a personal race report on Ultra Tour Monte Rosa by Sergio Mayayo, editor of Carrerasdemontana.com

TO RUN OR NOT TO RUN…. It’s seven in the morning at Grächen, a remote alpine village in the heart of the Swiss Valais Alps when I wake up. From my bed I can no longer enjoy the magnificent hanging glacier of the Weisshorn, as the deep early morning fog hides even the closest village huts. The storm of cold and rain that we have endured for the last 36 hours, from the Italian village of Gressoney in Aosta to our host site at Grachen in the Swiss Valais, has just sprinkled the mountains with fresh snow, ahead of autumn. And it won’t see the sun to shift it until Sunday when we’ll be home, as you see in the photo below. But today… today is still Saturday and this alpine village dawn finds me here, under an oppressive and icy fog that doesn’t get above 5ºC at this time, while I keep pondering to take up my bib or go back to bed.

I came here dreaming of the 100km of the Ultra Tour Monte Rosa, one of the four sister races that, together with the one hundred miles, the four-stage race and today’s Grachen Berglauf make up the fourth edition of the event created by the best ultra runner in history, Lizzy Hawker.

Ultra Tour Monte Rosa is today, arguably, the last great ultra that keeps that original Pioneer spirit alive and kicking. If you really like mountain races and alpine tops, this race offers a unique experience these days, far removed from the greenback, glamour, media and confetti festival avenues chosen by other endurance events, from Ironman to UTMB Int. In my case, three gamma rays picked up my spaceship and brought me to this laid-back planet of the ultra Galaxy, under an irresisitible attraction.

The first ray, the unique personality of Lizzy, who in addition to winning Ultra Trail Mont Blanc five times was world champion in 100km road running, plus also took on to run the Great Himalayan Trail solo. A world elite runner, perhaps the best in history, who being injured in Chamonix did not hesitate to join as a volunteer for UTMB 2013 and there I found her, while I was running those one hundred miles and upon passing by the Bonatti refuge I recognized the tiny volunteer, all in black, who was bending down to help me refill the water from my backpack. A moment to treasure.

The second reason to come to the Ultra Tour Monte Rosa comes down to the incredible landscapes it crosses. This Monte Rosa is the second Alpine colossus, crowned by the 4,634m of the Dufourspitze. In fact, according to the pioneering first president of the Alpine Club, John Ball, the Monte Rosa massif was to be credited not only as the most gracious in the Alps, but even as the most beautiful mountain range to be found all over the world.

In my alpine running experience, I was already familiar with the Swiss Zermatt, having stayed there for several editions of the Matterhorn Ultra KS. As for the Italian Gressoney village I also knew it well from the Tor des Geants. So among the many charming alpine villages that this great traverse touches, Grachen was for me the main discovery of the trip.

More reserved and less commonly visited than its proud neighbors of Zermatt and Saas Fee, Grachen and its people yet hold a different, more friendly and familiar charm. And its landscapes also rise high. Yes, sure it is not crowned by such an icon as the Matterhorn pyramid, but the Weisshorn’s suspended glaciers and its four thousand metre peaks also possess true alpine majesty. Not to mention the wide and nicely marked trail network, open all year to enjoy hiking, trail, mountain bike and of course, skiing. Will I return to Grachen? For sure, with this winter´s skiing season as first stop.

The third reason to be here was that, this UTMR now enjoys a magnificent moment in its history, which I want to take advantage of. It is already large enough to offer very complex services: From the Chamonix-Grachen transfer to the GPS device for my safety placed by the volunteers on the shoulder of my backpack and many more. But it is small enough to greet Lizzy, Richard and other members of the race team in person.

And above all, you can chat and share the challenge without stress with other runners around the world. A distinctly British aroma clearly dominates this melting pot, for sure. Yet the mix is a truly Cosmopolitan dish. In my 100km there was a maximum of 300 bibs, coming from all over the world, that found me having dinner at Gressoney the night before the race at the “spanish quarter” of the restaurant with two Ecuadorians, a Bolivian and a Brazilian, after having left several Spanish friends embarked on the race of the one hundred miles the night before and between an environment where British, Italians, French, Chinese and Nepalese ran, ate and slept together naturally. Our little tribe of crazy mountaineers sharing that camaraderie around a small corner of the Alps. Maybe the feelings of Balmat, Pacard and other pioneers of yesteryear were not so different.

Completing the 100KM Ultra was my challenge: racing from Gressoney in Aosta back to Grachen in the Valais, summiting three 3.000m high passes along the way. But it was not to be. Yesterday morning in Gressoney, we were dealt a blow: the heavy rain and the 5ºC down at Gressoney had also left up to 30cm of fresh snow and several degrees below zero up by the three 3,000m cols that we were to cross in our 100km course. The organization, after neutralizing the race here the night before, after 84km the one hundred miles race and the third day of the four stages event, now told us at 9AM that as the weather was not improving our 100km should also be suspended.

On the other hand, all those runners from the three races suspended on September 6, were graciously invited to run the Grachen Berglauf on September 7, once the worst of the storm had passed, to enjoy the chance of climbing up and down from Grachen to the neighbouring peaks and glaciers in a demanding 23km course with 1,300m of ascent.

And here I am. GRACHEN-7AM Standing up, looking out the window and wondering whether it’s worth going out or not … In the end, I dressed, ate, drank and went out to play. I hit it just right. Smiles greeted me by the Dorfplatz start, coming from my companions of the 100km and the one hundred miles as we were all back to those mountain trails we love so much. Pruden, Daniel, Jose Luis, Rebecca, Pia, Laura… they all reminded me that in the end, the time and the splits are pretty much irrelevant to our funny mountain running tribe. Because, when one day we chose to run by the mountains it had all to do with those incredible sensations we feel along the way, back to the smiling child we once were and away from the concerned lap runner that hamsters around the same streets or track, once and again.

So off we all went! At 10am the peloton kicked off from Grachen in the fog and the cold. Luckily the rain and the snow stopped just before, and Lizzy was there at the last curve in the village while we took the steep climbing trail up into the forest, waving us goodbye. And climb we did, on a course adjusted to 18km with 1,300m of ascent that took us up and up on a path among the pine forest to the rocky tops that crown the ski resort. The cold there, at snowline, was balanced by the warm smiles of a handful of volunteers, who cheered us before sending us down a vertiginous descent in the clouds to the base of the ski resort.

And from there, another 600m back down a beautiful path through the woods. Playing among the fir trees, rocks, black earth and roots, becoming a child again before ending with a smile back in Grachen.

Was it all worth it? I think so! I met a charming little corner of the Swiss Alps, which offers much of what I love in the Alps and to which, God willing, I hope to return this very winter to go down on my skis among those same trails that I trod upon this September. And I met a small tribe of romantic, old-style alpine pioneers who still dream about discovering new trails and mountains by themselves, rather than following the big avenue marked by the mainstream media and the masses that year after year flood neighboring Zermatt and Chamonix.

See you at Ultra Tour Monte Rosa 2020: Those one hundred kilometers and me, still have much to discuss….

Are you coming too? 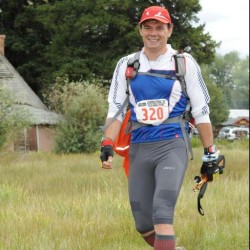